This past summer, Colorado experienced unprecedented flooding and the lives of so many were turned upside-down without much warning.  What would you do if floodwaters erased a lifetime of memories?

Art and Fran Parker were one such family whose home was flooded.  Art is a lifetime member of the Colorado Auctioneers Association, past President (1986-1988), and esteemed member of the Colorado Auctioneers Association Hall of Fame. Art and Fran are well known throughout the Northern Colorado community for their volunteer work and commitment to helping others without ever asking for anything in return.

On September 13, 2013, the floodwaters completely consumed their land, barns, buildings, pastures, and home.  The hardest part Art said was that he was on the western slope working an auction at the time the floodwaters hit.  Franny, the strong willed woman that she is, was on her own to get their livestock and horses out of danger, but with a little help from some friends, she did it.  “You can’t ask for a better partner,” said Art, “I knew that even though I was gone, at least the livestock and our family were safe.  That is all that is important.”

Art and Fran, with the help of their daughters and dedicated friends, have had to completely rebuild.  This is the first year in many that Art was not able to attend the CAA Convention. He was heartbroken he wasn’t able to see his many friends and colleagues this past January and although he was missed, everyone understood as they were trying to rebuild their home and their life.

The Colorado Auctioneers Association has always thought it important to help members during times of crisis, and this was no exception.  During the general business meeting at the Annual Convention, a motion was made and passed that CAA donate $300 from the general fund.  Members then “passed the hat” so individuals could donate additional funds. In a short while $2000 was collected to help Art and Fran with rebuilding efforts.

CAA Board Member, Walt Partridge, and CAA Member Lance Nichols presented a check to Art this February, at one of his auctions.  This gesture from the CAA and its membership literally brought Art to tears of gratitude.  Art and Fran are proud people who do not rely on others, but are extremely grateful for every little bit of support they have received. Members of the CAA are family and we are happy to assist the Parkers as they rebuild. 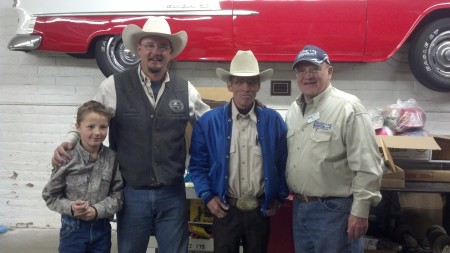