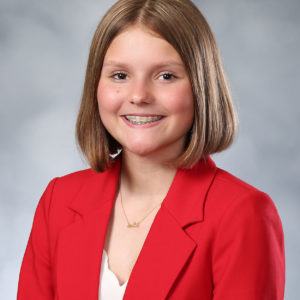 Members attending the annual, CAA Convention, who had completed their auction training within the last twelve months  were eligible to compete in the Troil  Welton First Timers Bid Calling Contest on Friday night. This is always a spirited and fun competition in which attending association members and the public support the competitors.  At the end of the evening Eaton, Colorado’s Shelby Shuman was crowned the contest champion.  In an interview with Shelby, she shared that she is  involved in the FFA program and her Supervised Agricultural Experience (SAE) is auctioneering.  “I work at the coffee shop in my church, play High School Tennis and serve as the manager for the Eaton High school basketball team.  I love to travel and to be with my friends or my brother and sister.” In my last interview with her in 2017 as the  Colorado Jr. Bid Calling Champion, she stated that she had a great interest in science.  So is that still true?  “I am interested in Physical Therapy and may study that in college.  It will go right along with auctioneering as I will still be able to help people.” So, what does this mean for her and her auction career?  I asked her what she has been doing in the auction industry and maybe, where would she like to be in the industry?  She replied by saying, “I like helping people and it has been exciting to work with churches and local clubs to help them raise money.  It was an honor to have the local high school football coach ask me to help the team raise money through an auction.  That was an interesting one since it was in front on my high school friends.” Shelby is no stranger to competing and now has earned two titles by doing so; 2017 Colorado Jr. Bid Calling Contest and the 2020 Troil Welton First Timers Bid Calling Contest.   In addition, she has competed at the National Auctioneers Association International Auctioneers Championship  (IJAC) twice.   To me, she has always been a quiet, somewhat shy young lady  and I wanted to ask her, why she  competes and how she feels about it?  “I enjoy competing as each time I compete I meet new friends, learn more about myself and improve my skills.  Knowing that I am going to compete creates a need to practice.  I really like doing tongue twisters and number drills.”     She has competed against some of the toughest in the industry and continues to shine.  Her tenacity is is unwavering and a force to be reckoned with!   Watch future articles of the CAA Newsletter for stories about some of the first time members. Each one has a unique story about why they decided to live their dream by becoming professional auctioneers.

About The Troil Welton Memorial Award

Troil C. Welton, who spent more than 45 years in the auction business, was a pioneer of the Colorado Auctioneers Association, and was always known for his special help to new auctioneers.  Following his death in 1999, the CAA Board voted to annually present the Troil Welton Memorial Award to the winner of the First Timers Bid Calling Contest held annually at the CAA Convention.  Mr. Welton began his career in the barn of his farm and ranch.  While milking, he would “auction” his cows every morning and evening and “sell” his farm machinery while working the fields.  He was selected CAA “Auctioneer of the Year” in 1985, and was inducted into the CAA Hall of Fame in 1986.  In 1987, he was inducted into the prestigious Hall of Fame of the National Auctioneers Association.

Brayden Nichols is no stranger to auctions.  He’s grown up in an auction family with his grandfather, John Nichols and his dad, Lance Nichols, along with his uncle, Michael Nichols. Brayden, the 2019 CAA Junior Bid Calling Champion is 14 years old and lives on his family’s farm north of Severance, CO.  He is an eighth grader at Severance Middle School, and he will attend Windsor High School next year.  His parents are Lance and Adele Nichols and his grandparents are John and Zee Nichols of Flagler, CO, and Kenneth and Joyce Lind of Severance, CO.  His family owns and operates Nichols Auctioneers, with offices in Severance and Flagler, CO. Brayden’s first time to auction in front of a crowd was at the age of 6, when he attended the Wyoming Auctioneers Association Convention with his parents.  He confidently held the microphone and counted by tens, “ten, ten, twenty, twenty, thirty, thirty….” all the way to one hundred, but never stopped his chant to actually take a bid! Brayden has entered the Colorado Jr Bid Calling competition every year it has been offered by the CAA and he is happy that he was chosen as this year’s winner. Brayden says he wishes more junior aged kids would go out for the competition because it would be a better competition.  He says, “If you don’t practice and you don’t try, you won’t get better.”  He works on his bid calling chant in the shower and when mowing the lawn and he enjoys saying tongue twisters to help practice. Brayden likes going to the annual CAA Convention because even as a kid, he says he learns a lot about the auction industry, and he is proud to be an Associate member of the CAA.  His favorite part of the auction business is being around family and friends.  Brayden’s favorite thing to bid on at auctions are fishing equipment, and he also was the high bidder of a nice compound bow.  He recently enjoyed auctioning off his sister at the Windsor FFA Chapter’s Member Sale and says “as is, where is, all sales are final.” In addition to helping at the Nichols’ family auctions, Brayden enjoys playing football, snow skiing, running track, fishing and rodeoing. Colorado Auctioneers Association notation:  Brayden began competing in the Colorado Jr Bid Calling competition prior to meeting the age requirements.  Our association is proud of Brayden, his courage, perseverance and talents. 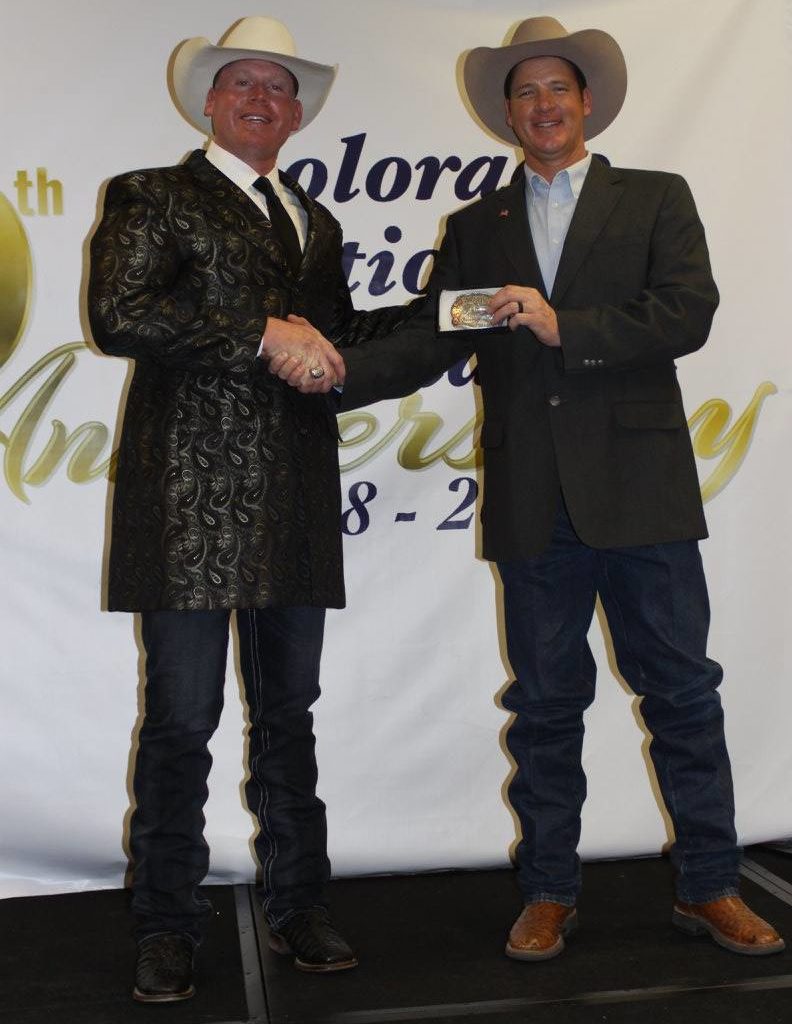 During the 60th Anniversary Colorado Auctioneers Association Convention, the Challenge Of Championscompetition was held for the first time and was a new addition to the auctions that are held during the annual convention.  This competition is only open to competitors that have been crowned as a Colorado Auctioneer Champion. Contestants vied for the coveted honor of being crowned the 1st Challenge of Champions Auctioneer, a custom-designed championship belt buckle, a cash award and plaque.  This contest is only scheduled to be held every 5 years and predicts to get more and more competitive throughout the years in addition to entertaining. Shawn Hagler of Hudson, Colorado, was crowned the 2018 Challenge Of Champions winner on Thursday, January 4, 2018.  Past Colorado State Champions competed in front of an esteemed panel of State, International and World Champion Auctioneer judges. Shawn first joined the CAA in 2003, where he won the Troil Welton Bid Calling Award.  Shortly thereafter, he found his way into the Auto Auction industry and discovered his love for the fast paced and demanding car auction world.  In 2008, he won the Colorado State Auctioneer Championship and the 2009 World Automobile Auctioneers Championship World Champion Ringman. After the past nine years of flying over 200 flights per year and working five auto auctions weekly in four different states, Shawn decided to slow down, be at home more and shift his business focus more to his Fundraising Auction business and to start a new venture.  Shawn feels that he has been blessed in the auction business and wants to give back to the profession that has given so much to him.  Shawn and his long-time friend Vaughn Long, 2007 WAAC World Champion Ringman, have started a new school, World Champion Ringman College, to train Ringmen.  Shawn feels that there is a large need for more advanced Ringman training and that while Shawn and Vaughn both received several years of on-the-job training at the auto auctions while under the tutelage of World Champion Paul C. Behr of World Wide College of Auctioneering and several other world class auctioneers, not many new auctioneers and Ringmen ever get that opportunity to learn and develop their skills and they want to give them that opportunity. This year Shawn is also using his Professional Speaking background to give motivational speeches, emcee all the concerts at the Greeley Stampede and to also speak at several State Auctioneer Association Conventions.  He looks forward to the next several years of serving on the CAA Board of Directors and hopes be able to once again give back to a great association that has given him so much over the past 15 years.   Each professional auctioneer who competed became a better auctioneer because of the contest and should be congratulated for taking part. 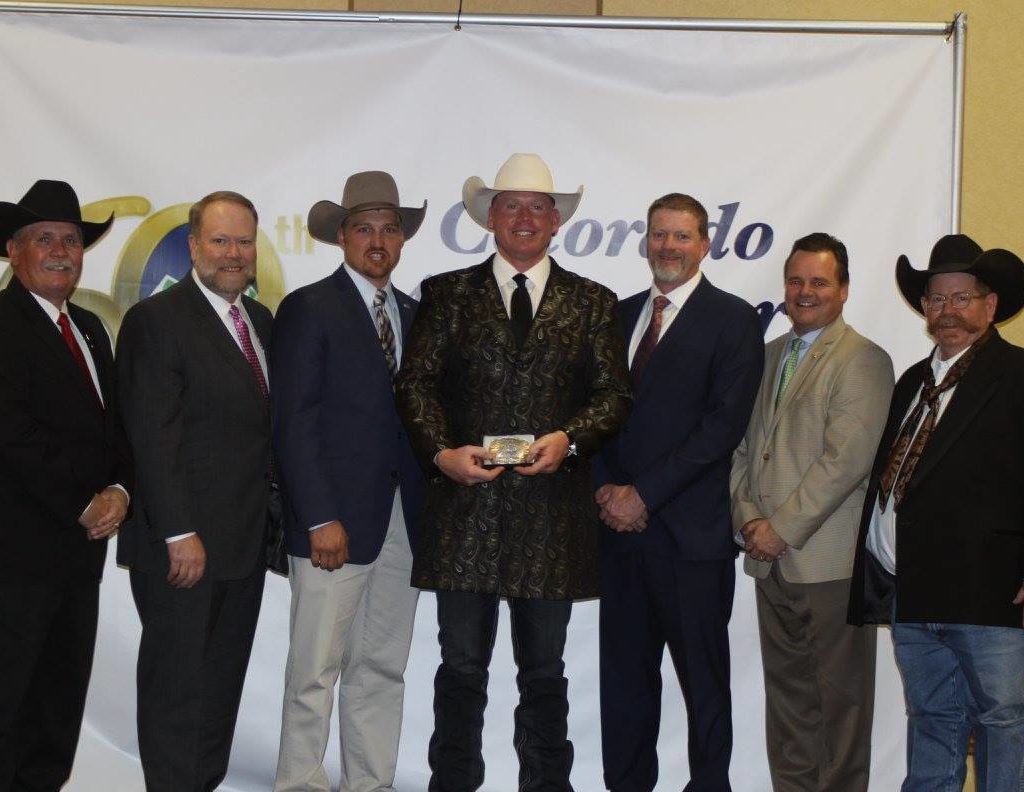