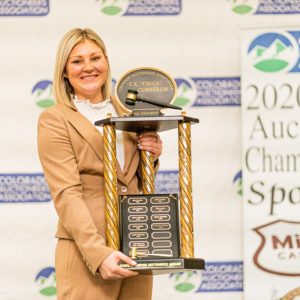 Halie is the second female champion to hold this coveted title for Colorado.  Earning the title as the Colorado State Champion Auctioneer is well earned & deserved due to the fact that women compete against men and do not have their own division for competition.   The competition consists of two rounds of auctioneering at a live, public auction held during the convention.  Each contestant is judged on appearance and presentation, body language, chant and desirability to be hired by the judges.  Along with the title, as the state champion she receives a custom designed belt buckle, the coveted Chuck Cumberlin “Go Your Best” trophy and a cash prize to compete at the National Auctioneers Association International Auctioneers Championship that will be held in July 2020 during the NAA Convention at San Diego, CA.

Halie is a second generation Auctioneer coming from a well respected auction family and has learned techniques from some of the best, including her uncle, Paul C. Behr, who is a three-time world champion Auctioneer. She is involved in multiple state Auctioneer associations and the National Auctioneers Association, which provides her opportunities to continue her education within the ever-involving auction industry in addition to her bachelor degree in Hospitality Management from Iowa State University.

Halie follows her passion in regard to charity and fundraising as a Benefit Auction Specialist (BAS). Her BAS certification from the National Auctioneers Association, provides her with expertise within the fundraising industry to assist nonprofit organizations to raise money. There are only approximately 200 individuals that hold the BAS certification worldwide.

Halie auctions the American Flag that was flown on 2019 National Auctioneers Day over the Colorado State Capitol as her uncle, Paul C. Behr holds it and assists her as a Ringman.

In regard to winning the title, Halie shares with us that, “Paul encourages me to do my best, take care of business, and never give up…important lessons when competing. I’ve always enjoyed competition — state track, basketball games, tournaments or watching my Dad coach wrestling meets. My love for competition has only expanded with auctioneering. Competing brings forth heart, grit and growth. Iron sharpens iron. Win or lose, I’ve learned you always win one way or another by competing. I’ve bettered myself, formed meaningful relationships with others, and always learn from the experience.

It means the world to me to represent the Colorado Auctioneers Association. Members of the CAA are my family. I would tell anyone wanting to compete to do it, but always be prepared…People put time and effort into endeavors that are important to them. Most important, be yourself. Show your heart. Every auction, every competition, and every time I step on the stage, it could be my last. I give it my all.”

For additional information, contact the Colorado Auctioneers Association at (303) 729-1195.